“By affirming transgender students and guaranteeing them these rights, we’re not denying anyone else’s rights. And sometimes I think that gets missed.”

— Jennifer Leininger with the Gender and Sex Development Program at Lurie Children’s Hospital in Chicago.

It’s a ukase, isn’t it? The boy president running wild in his last year in office, flashing his pearly whites ear to ear, having his way with pen and telephone.

And the Trib socks it to us on a Saturday morning in May. Page One, story of the day, complete with four-column, above-the-fold shot of real, live transgender poster boy, a handsome lad shown here. 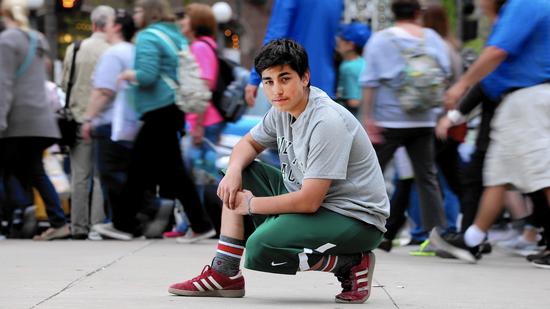 “Not denying anyone else’s rights,” says the sex-development specialist, ignoring the right to privacy argued by bathroom originalists — the cornerstone of abortion rights, by the way, for what that’s worth.

Behold cultural Marxism, everything up for grabs, life is flowing like a river, never the same, keep the bourgeois enemy on his toes. What Obama and his uber-promoter Axelrod had in mind it seems ages ago by “hope and change”?

And there’s uproar from right and left at Trump’s vagueness and populism. O. and A. paved the way.

The Lurie woman’s quote fits this story, with its impressionistic argument — heavens, just reporting a social phenomenon, you know — one school official after another telling us they are already doing what Obama has ordered under threat of cutting off funding if they don’t do. Federal money, federal control.

In the story’s 1,300 words, there’s reference in a few lines to Palatine parents’ suit claiming ‘”intimidating and hostile” environment for students who share the locker room with the transgender student.’ That’s it for anything to counter the theme. Privacy is nowhere mentioned.

Getting it right, we trust, and why not? They looked around and found these blokes, with nary a mumblin’ word of dissent.

And the whole story placed to count! Assuming so much, hitting readers over coffee with its multiple-point type blaring “Many schools ahead of transgender decree,” playing readers.

Trib columnists Huppke and Zorn  have chimed in to approve the great bathroom decree, or at least pooh-pooh objections. Readers expect that. But to deliver a front-page headline story that argues without declaring its intentions? Stuff it, please.